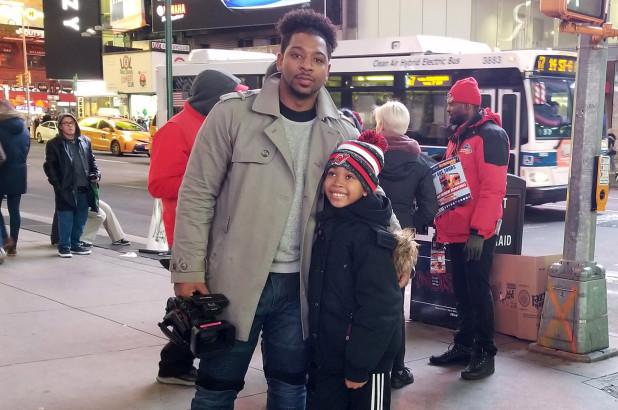 This article was originally published by the NY Post, authored by Adam Schrader

Jovan Acree says his “rags-to-riches” story was born after a failed tryout for the New York Knicks.

Acree played in the semi-pros — but often found himself sleeping on couches — for over a decade.

But after missing his chance with the Knicks in 2016, he launched his luxury fashion brand, Daekshinco. His denim has now been worn by stars such as Tiffany Haddish, Lil Pump and Cardi B.

The New Jersey native’s basketball aspirations started after Delaware State University selected him to play NCAA Division 1 hoops in 1999. Acree’s mom bounced a check to pay for the education, he said, but poor grades disqualified him at the end of his freshman year.

“I was supposed to play there for four years, but it didn’t work out like that,” Acree said. “So I returned home.”

During the summer, Acree coached in local community leagues, where he met coach Bruce Hicks of Raritan Valley Community College in New Jersey.

Hicks convinced Acree to return to school, which he did in 2008 and graduated with an associate’s degree in communications in 2010.

“My heart and soul were really into the sports component,” he said. “I needed another opportunity to prove that I could actually get to the pros.”

During the summers, Hicks would train Acree — by then 10 years older than the athletes he was playing with — for team tryouts.

“I was a grown man playing with 19- to 20-year-olds,” he said. “At that age, to be playing Division II basketball was basically unheard of.”

Acree said his first big tryout was for Baltimore’s semi-pro team, the Bay Area Shuckers. He played three games before earning a tryout for USA Select Basketball’s 2011 tour of Europe.

“That’s how it works in semi-pro sports,” he said. “If you get an opportunity to try out, or a coach looks for guards, you get to go overseas.”

During the tour, which began in London, Acree showcased his skills, playing 15 UK teams, until he was picked up for a short contract with the Dublin Bulldogs in September 2011.

He played another short contract for the University of Limerick that winter before returning home in March 2012 for the birth of his son, Jordan.

“That’s a really hard time to keep money in your pocket. You’re not really playing like overseas; you’re still in limbo,” he said. “I wasn’t getting any more offers overseas. I was pretty much a man on a couch.”

Functionally homeless, Acree crashed with friends and family before landing another short contract playing for Universal Basketball Association teams including the Houston Havok.

“I decided to get into fashion because I was going back and forth with jobs, not really taking care of the rent the way it was supposed to be,” Acree said. “With the birth of my son, I had to make sure I had a situation where I could take care of my family.”

The athlete began an apprenticeship for a friend — now his business partner — who at the time worked in clothing manufacturing and textiles. Diego Espejo taught Acree the ropes for sketching designs, cutting and sewing, and promoting a brand — including placing clothes on celebrities.

In 2012, Acree partnered with Espejo to begin the launch of Daekshinco. At that point,  he was still continuing his bid for NBA fame.

“I was still trying to play with anybody,” Acree said. “Basketball was still in limbo, and traveling back and forth for tryouts made it really hard to make money.”

After an aunt died and left him enough money to buy his own production machines, Acree was able to really get his fashion business going. He started earning attention when he gave his clothes to homeless people and college dropouts.

“My mission was to figure out who I identified with,” Acree said. “These people that need help, who have the same mission as I do but don’t really have full-time work or full-time pay, I identify with them.”

The fatal blow to Acree’s basketball career came in 2016 when he tried out for the New York Knicks and, he said, made it to the last cut. The heartbreak of almost playing for the Knicks was too much to handle, and he finally left his hoop dreams behind.

“It’s like a real ground-up approach, you know, like a true rags-to-riches type of story,” Acree said.

Colleges and Universities Have Introduced Marijuana-Related-Courses in Their Curriculum