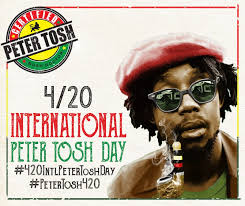 April 2020 marks the first time cannabis lovers can have an entire month suited just for them, 4/20 all month long. Now that the national stoner holiday 4/20 is among us and with 2020 pretty much on quarantine this will be 4/20 for the ages. Virtual smoke outs. No sharing of joints. “Social Distant Sesh’s” brought to you by Zoom or Google Hangouts. The fact cannabis has been considered an essential business and dispensaries remain open in the time of crisis. This 4/20 celebration also marks the 5th year anniversary or Peter Tosh Day.

Peter Tosh Day was created in 2015 by his daughter Niambe Tosh, in honor of his “philosophy of responsible cannabis consumption for medicinal and spiritual health benefits”. Peter Tosh was the founder of the legendary band The Wailers. Wailers is the same band that birthed another legend, Bob Marley. Many people resonate cannabis legalization and reggae with Bob Marley. Peter Tosh on the other hand was considered the true cannabis warrior. Having several encounters with law enforcement and contributing to international revolutions.

Here are 5 things in honor of the legend Peter Tosh on International Peter Tosh Day: